The continued challenges of corruption despite the efforts of some African governments to address it have kept millions of people in extreme poverty. ONE in partnership with the Open Society Initiative for West Africa (OSIWA) and the Nigerian Ministry of Justice is convening the Nigeria Anti- Corruption Summit on 5 May to engage African leadership on effective outcomes for the 2016 International Anti-Corruption Summit (London, 12 May 2016). Simultaneously ONE is also hosting a ‘Fair Play Standard: Ending Corruption and Illicit Financial Flows’ side-event on the side-lines of the OGP Africa Regional Summit in Cape Town.

The High Level Panel on Illicit Financial Flows, a joint report by the African Union (AU) and the United Nations Economic for Africa (UNECA), estimates that Africa loses more than US$50 billion a year to corruption and illicit financial flows. While many point fingers to some African Leaders’ records of poor governance and corruption, it’s easy to forget the critical weapons in money launderer’s arsenal – secret companies, banks and law firms all too often based in G20 countries and their related offshore centres. 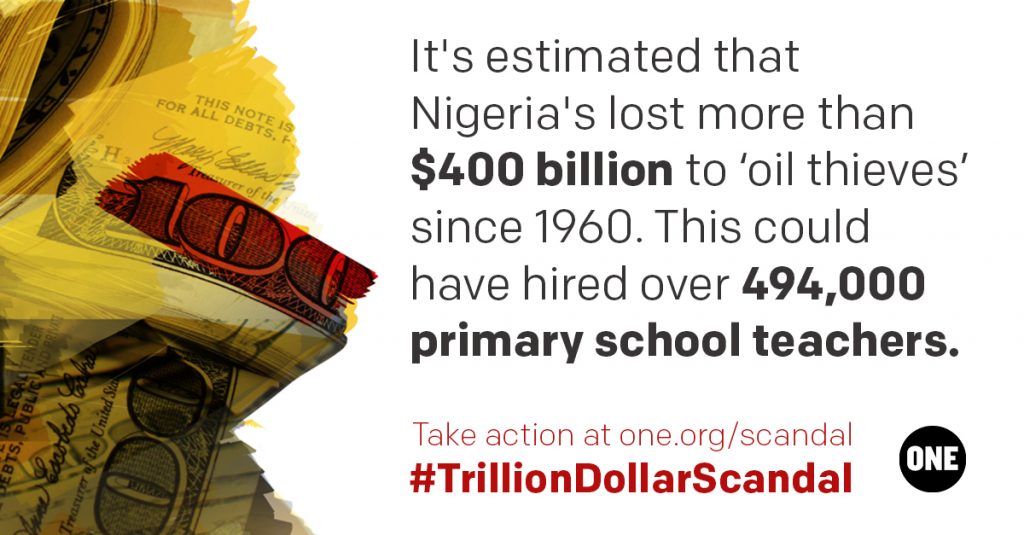 Corruption has a corrosive effect on Africans. President Alpha Condé of Guinea concluded that lack of transparency and economic corruption does not only mean unpaid taxes and lack of competition; it also corrodes the political processes and undermines evolving democracy. It impedes change and opens the door to frustration and political tension.

While the world is still buzzing with the Panama Papers, the summit is timely. Those leaked documents implicate African leaders and officials in a system deliberately designed to hide identities of the owners of companies and facilitate illegal tax evasion, money laundering and other forms of corruption. The High Level Panel Report on Illicit Financial Flows has made calls for the international financial system including African countries to disclose beneficial ownership information through public registries which will shed more light on the actual owner and benefactors of corporate entities and trusts. This will assist African governments and tax authorities to ‘Follow the Money’ hidden by individuals and corporate entities.

The benefits could be dramatic. ONE’s analysis in the Trillion Dollar Scandal report shows that if steps are taken to end corruption and illicit activities, it could free up revenue that could educate an additional 10 million children per year; provide antiretroviral drugs (ARVs) for over 11 million people living with HIV/AIDS as well as pay for almost 165 million vaccines in Sub-Saharan Africa.

ONE is calling on leaders to agree a new approach to addressing corruption by implementing a “Fair Play Standard.” This would create an international norm for countries at the vanguard of fighting corruption by taking 7 steps:

The Anti-Corruption Summit provides an opportunity for world leaders to right the wrong of corruption and mitigate the harms it causes. This is one of the most pressing issues of our time. Without urgent action we will never achieve the goals enshrined in the African Union’s Agenda 2063.

By working together, we can crush corruption. Take action at one.org/scandal

Aid and DevelopmentCultureDebtPolicyTrade and Investment