The following is a guest blog from Noella Moshi, United Against Malaria

Malaria kills nearly 700,000 people every year and costs sub-Saharan Africa up to 12 billion dollars in economic productivity, foreign investment, tourism and trade each year. It’s a huge barrier to economic development in affected countries and has life-altering, long-term repercussions for sick children. The good news is that the whole malaria mess can be fixed in our lifetime. Cue United Against Malaria into the picture.

United Against Malaria (UAM) is a conglomeration of private sectors, non-governmental organizations, academic institutions and governments who have come together to rid the world of malaria once and for all. UAM was born amidst the explosive excitement of the 2010 FIFA World Cup in South Africa. We rode this crest of energy and used it to create global awareness of malaria.

UAM uses a few key strategies to combat malaria throughout Africa, including educating organizations on malaria-safe practices, distributing mosquito nets (which act to prevent infection), and fundraising for the purchase and wider distribution of nets. Recently, the fundraising arm of UAM expanded to encompass merchandise sales, all in the name of malaria. The United Against Malaria bracelet is a brightly beaded symbol of the cause.

With World Malaria Day around the corner (April 25), UAM has powered up like never before in a huge drive to sell UAM bracelets for mosquito net distribution. 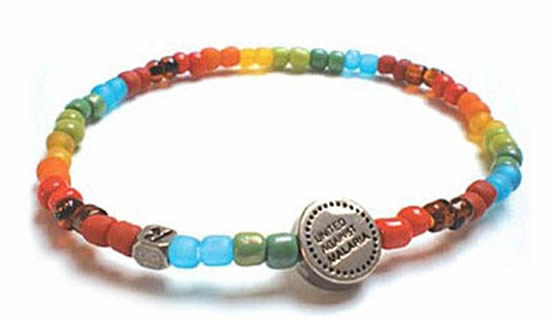 Here in South Africa, Cape Union Mart, Nando’s Chickenland, Exclusive Books, and several other private sector organizations, have risen to the occasion by stocking and selling UAM bracelets. Cape Union Mart has recently stocked 50,000 units to sell in the lead-up to World Malaria Day. Their stock is already thinning out; testament to the energy and involvement of every individual who bought a bracelet.

Also joining the push to sell bracelets is legendary African Explorer Kingsley Holgate. Kingsley has braved drastic terrain as he travelled through virtually inaccessible parts of the African continent to distribute mosquito nets.

As we contemplate World Malaria Day today, , we at UAM experience palpable excitement when we think of the number of nets that UAM bracelet sales will enable us donate.  To all you bracelet buyers, past and future, thank you for your heartfelt giving, and for playing an important part in the worldwide plan to eradicate malaria.

Share your support for World Malaria Day by following United Against Malaria, Relate and Cape Union Mart on Facebook, and sharing news via Twitter by following @UAMalaria, and @CapeUnionMart.